What do we know about werewolves? These are mystical creatures that can magically change their appearance, turning from a human into a werewolf. It is known that the first werewolf legends came from the history of ancient Greece and Rome. And the later Middle Ages are generally replete with stories about magic and werewolves, precisely at the time of the heyday of knowledge about witchcraft and the other world.

Werewolves are dangerous. This is a sacrament and mysticism. It both scares and captivates curious players of our time to try Werewolf slot. If you are courageous and fearless, if the excitement and the scenery only fuel your expectations from the game, go for it. The developers have tried their best both in the quality of graphics, animation, and in visual, and functionality – in everything that will give you the maximum of vivid emotions and sensations. 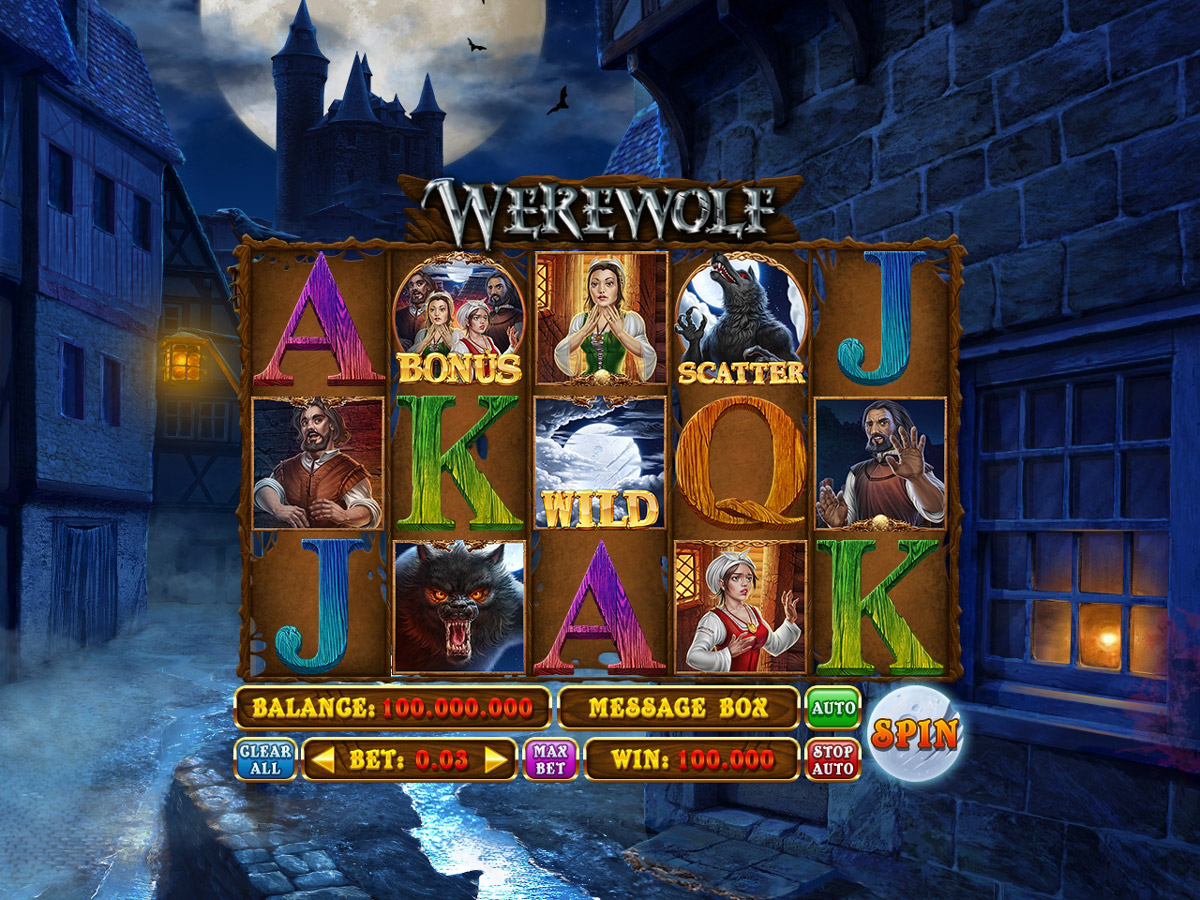 On the main background of the slot, in the center of the screen, there is a wooden reel, visually divided into five identical columns, in which all the slot symbols are presented. At the top of the reel there is the name of the Werewolf slot in large silver letters. At the bottom is the control panel, where the cells for balance, messages, total winnings, bets are located, as well as a large round SPIN button in the form of a moon. Also, the control panel is equipped with additional bright navigation buttons. 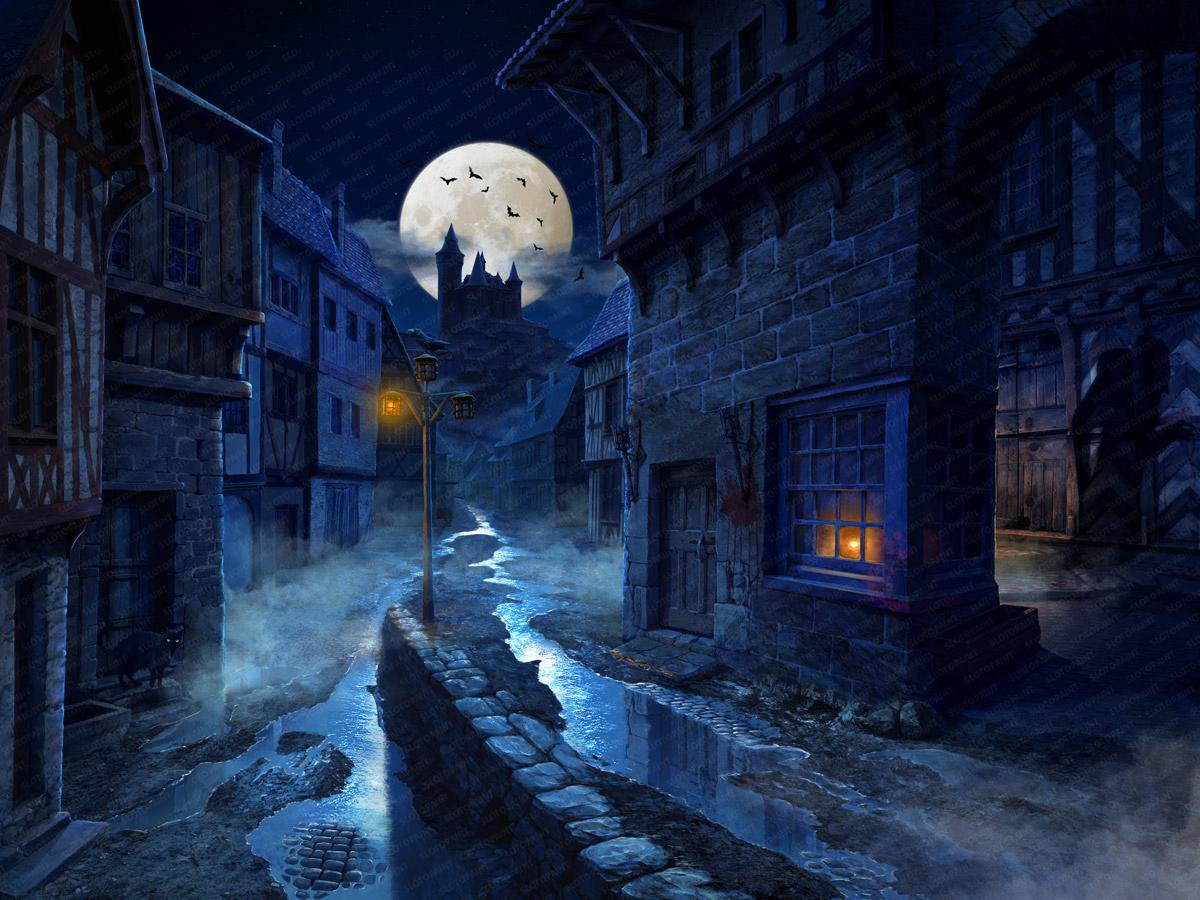 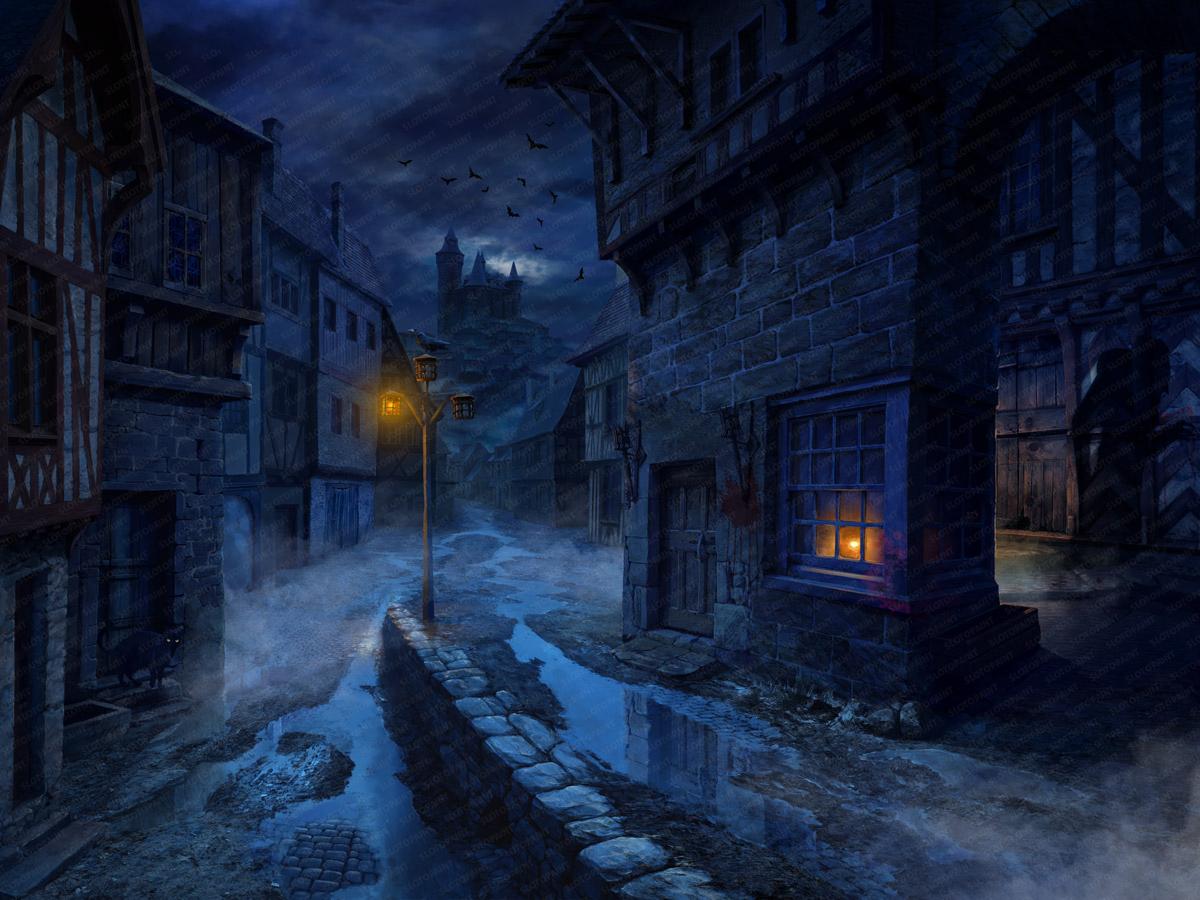 Night in the old town. There are stone buildings on either side of the screen. The dark sky, covered with heavy clouds, faintly shows the light of the full moon from behind them. Black bats fly in the sky. In the middle of the street, there is a lantern emitting dim light, as well as lighting from a burning lamp in the window of the house to the right. Part of the street is reflected in puddles. Foggy haze in the foreground and on the sides of the picture adds a mystical mood to the picture.

Here are three symbols of the highest category in round and square gold frames with a werewolf decor with an open mouth on them. The first symbol – BONUS in large golden letters – with the main characters of the slot, whose faces are worried about the appearance of a werewolf in the city. WILD – a symbol in gold letters – a full white moon in clouds with a trail of sharp claws on it. SCATTER in gold letters – a shaggy gray werewolf with red eyes on the background of a full moon. 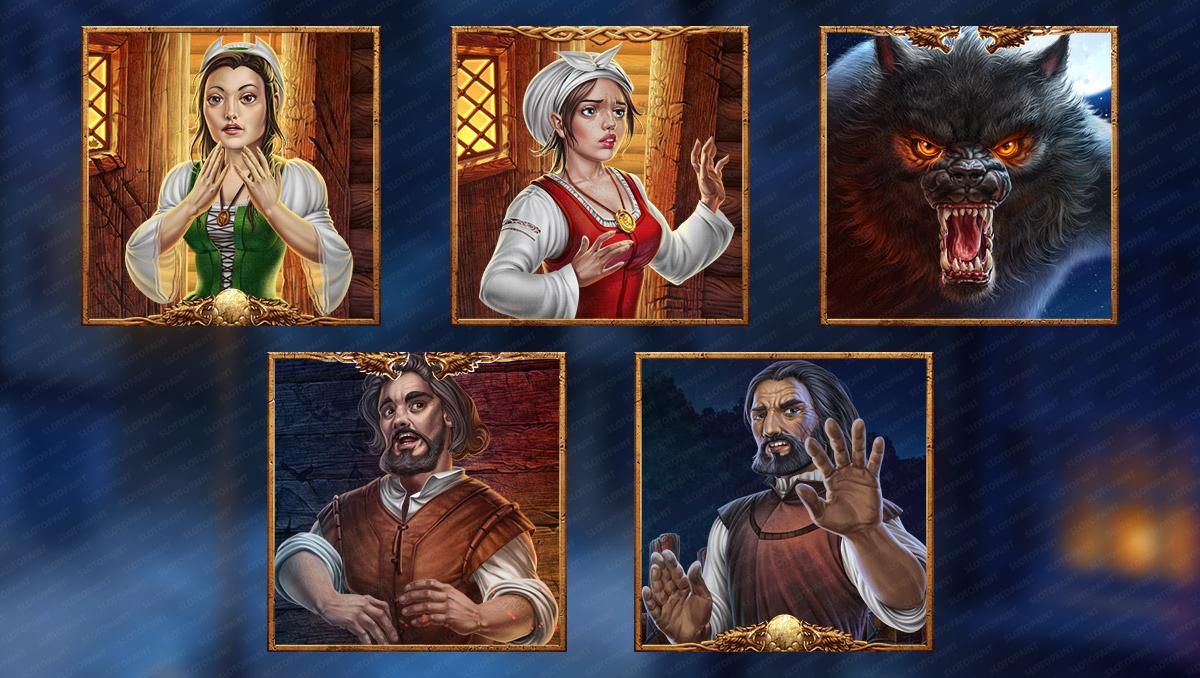 The five symbols of the middle category are presented in square gold frames. Here are the main characters of the slot. The first – on the background of a wooden house with an open door, a woman in a white and green dress, with her hands on her face from fear. The second symbol is a woman in a white and red dress with a scarf on her head and fear on her face on the background of a wooden house. The third character is a dark gray werewolf, with a wolf’s face and an angry grin, orange-red eyes. The fourth character is a bearded man in white and brown clothes, with wavy hair. Another main character is a bearded man with wavy hair, in brown and white clothes, in a defensive position.

Here are the symbols of the lowest category in the form of wooden letters: A, K, Q, J. The letters are represented in red, green, orange and blue.

Animation of all symbols of the slot. The symbol of the highest category – BONUS – with the main characters of the slot, whose faces are worried about the appearance of a werewolf in the background with an angry grin and red burning gases. WILD – the full white moon is covered with dark clouds, covering the moon. SCATTER is a furry gray werewolf with red eyes who howls at the moon.

Medium category symbols. The first is a woman in a white and green dress, throwing her hands up to her face in fear. Shimmering golden light in the background. The second symbol is a woman in a white and red dress with a scarf on her head, with fear on her face, she lowers her right hand, and behind a shimmering golden light. The third symbol is a werewolf howling at the moon. The fourth symbol is a bearded man who spreads his hands. Fifth – the second bearded man defends himself with his hand.

Symbols of the lowest category – letters around the perimeter are highlighted with neon at the time of animation.

Here we can see ten identical cards in a bright neon glow in two rows of five pictures each. This is a Bonus game that allows you to open pictures, among which you need to find werewolf symbols, increasing your chance of winning. 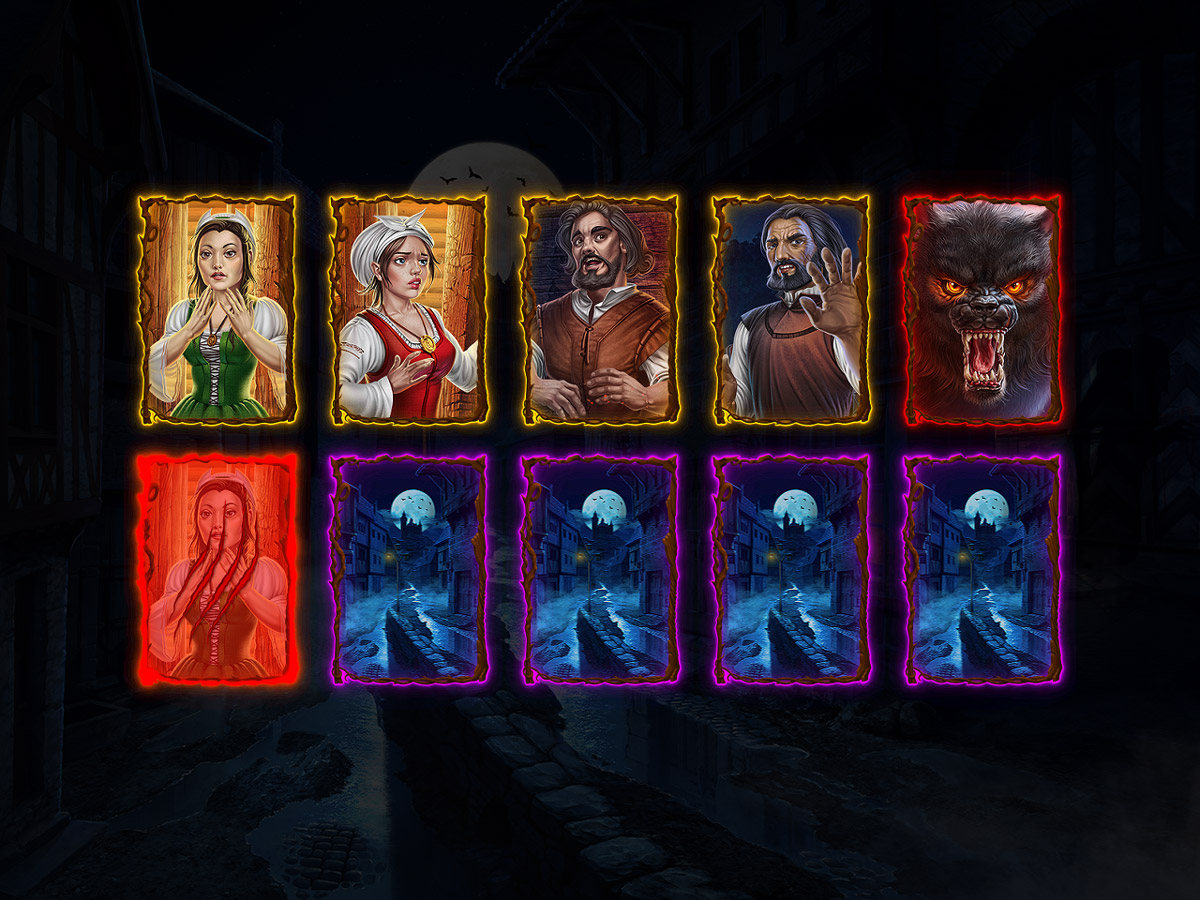 Here you can see the course of the bonus game – upside cards, including the inhabitants of the city and slot symbols with images of werewolf symbols.

Animation of the bonus game, where in turn, one after another, cards are rotated, highlighted with orange neon along the perimeter each. And pictures with images and elements of a werewolf are highlighted in bright red. 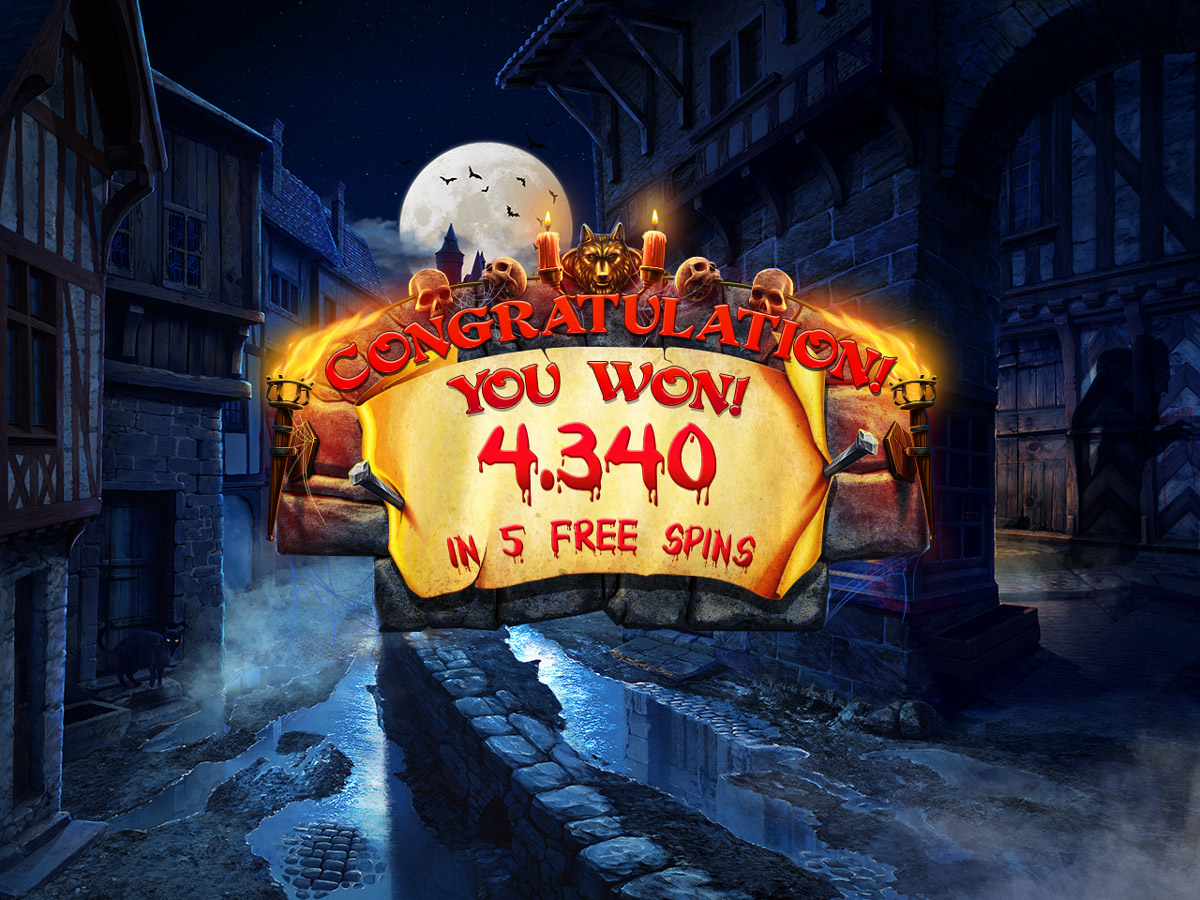 On the main background of the slot, there is a congratulatory screen – an unfolded bright yellow papyrus that is pinned to a stone wall with nails. At the top it is decorated with an image of a werewolf, skulls, and side torches. In the center there is an inscription in big red letters – Congratulation! Below is an inscription that you have won the amount of money from five free spins. 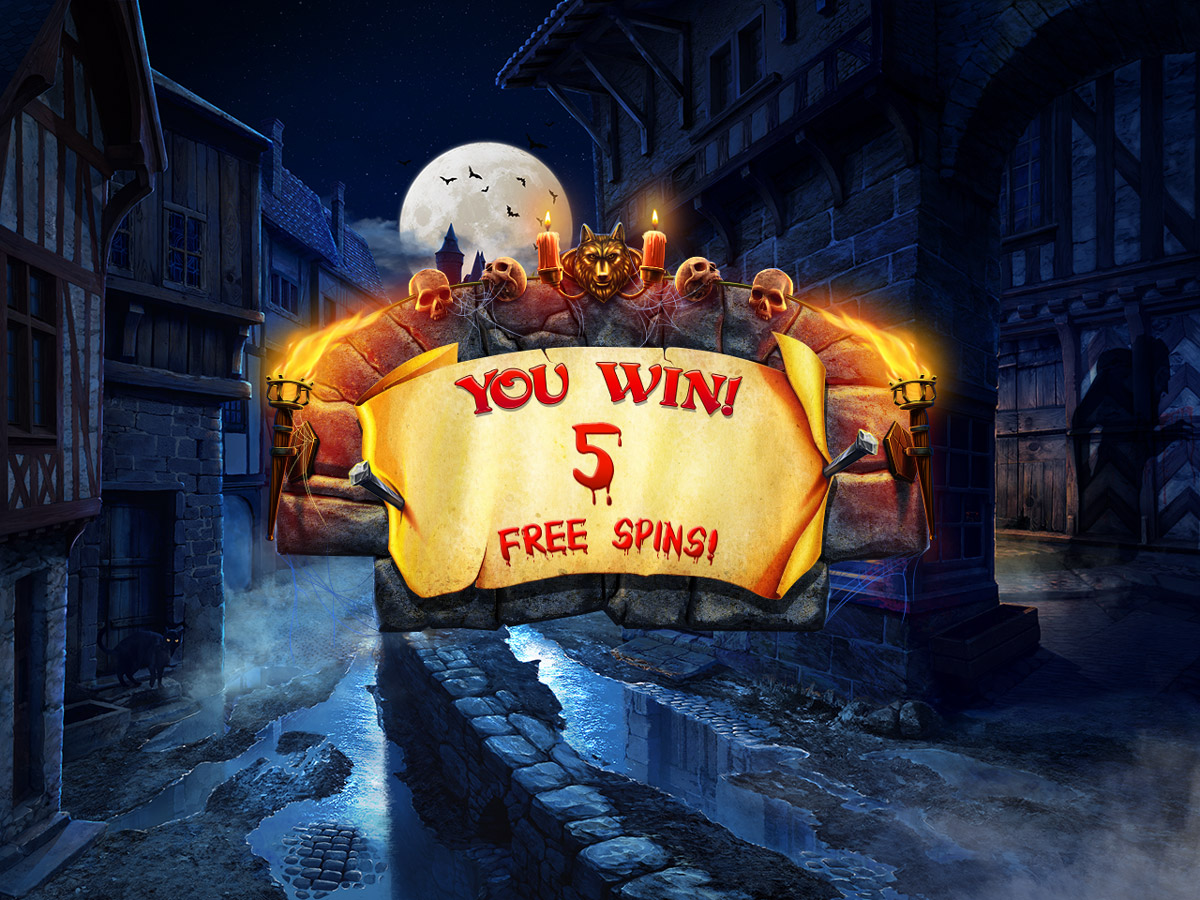 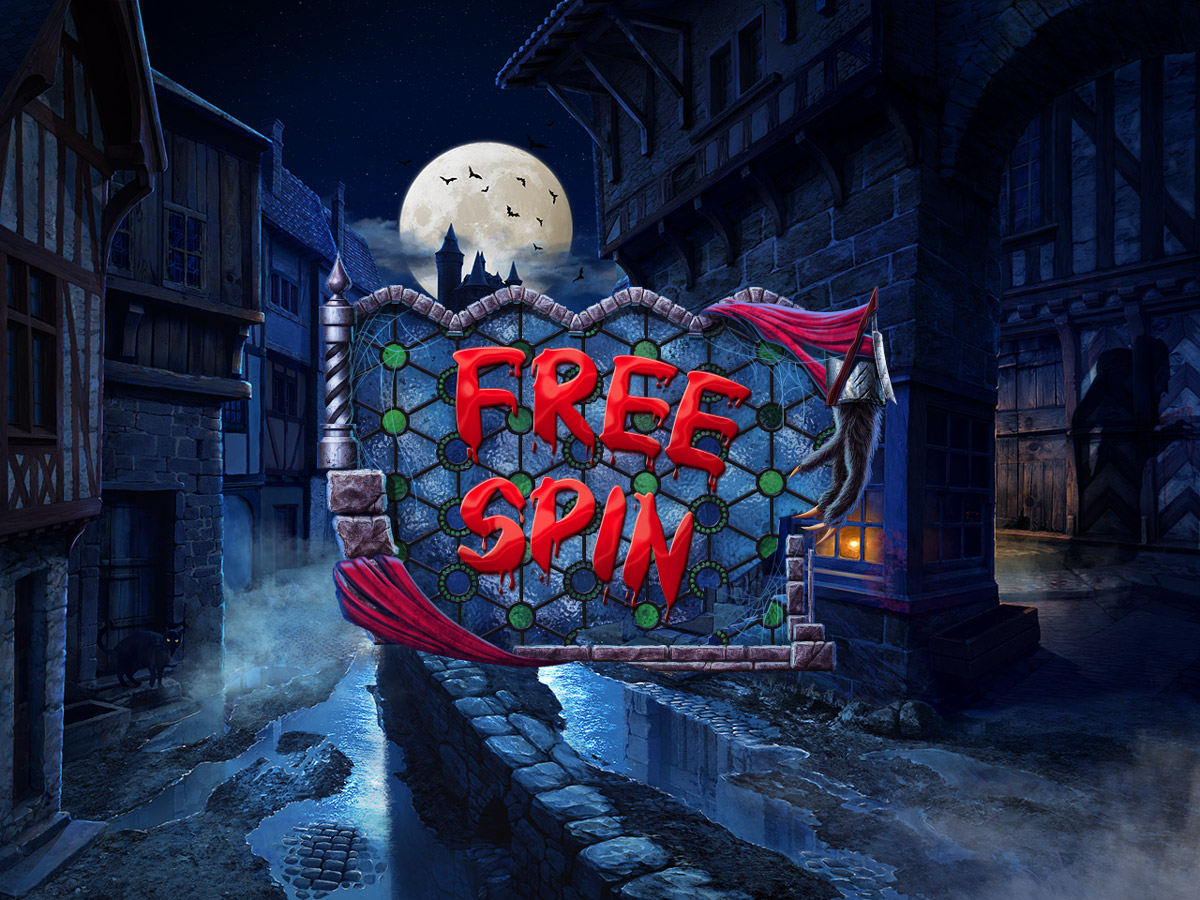 Pop-up Free SPIN. On the main background of the slot in the center there is an inscription in large bloody letters “Free SPIN”, on the background of a stone wall with stained-glass windows and cobwebs.

Pop-up Free SPIN animation. A stone wall appears in the center of the screen, where the words in bloody large letters appear from the center – Free SPIN. 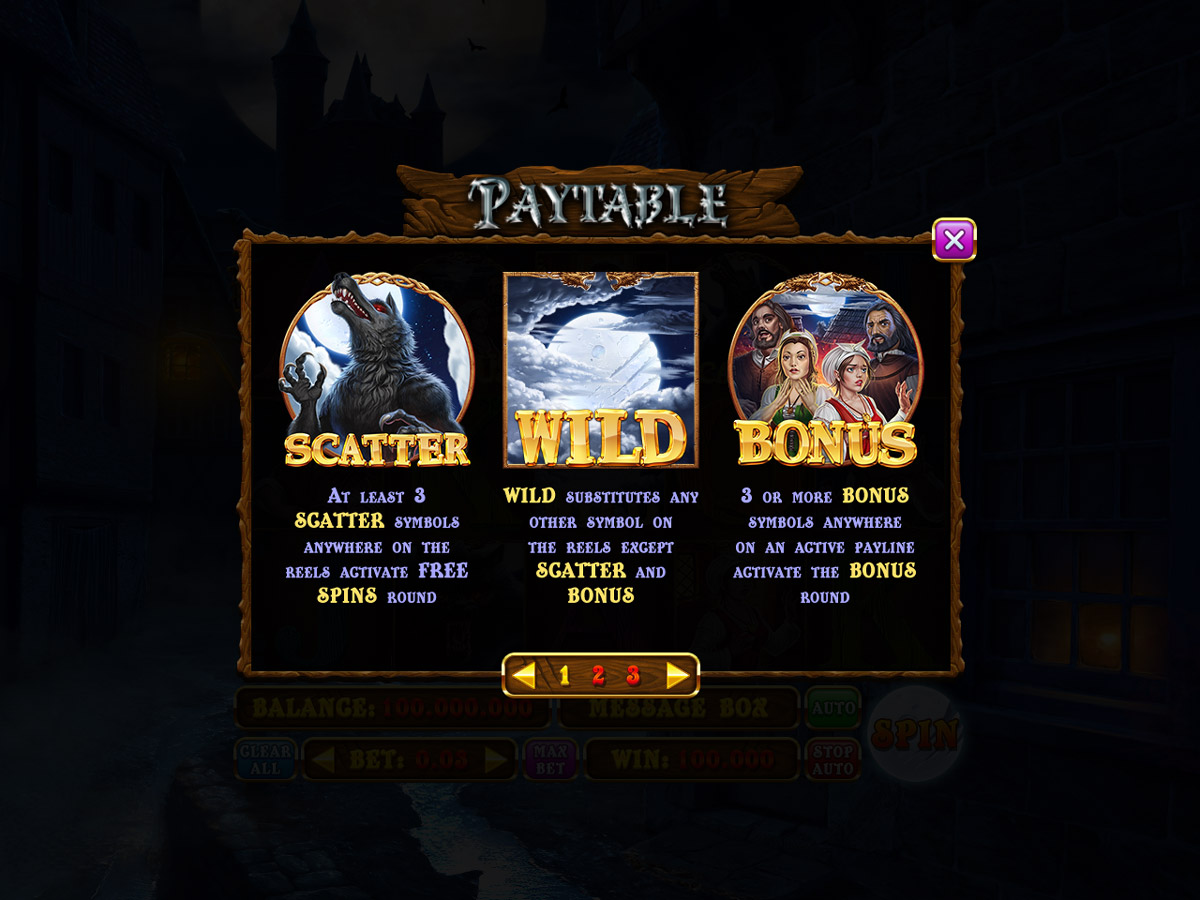 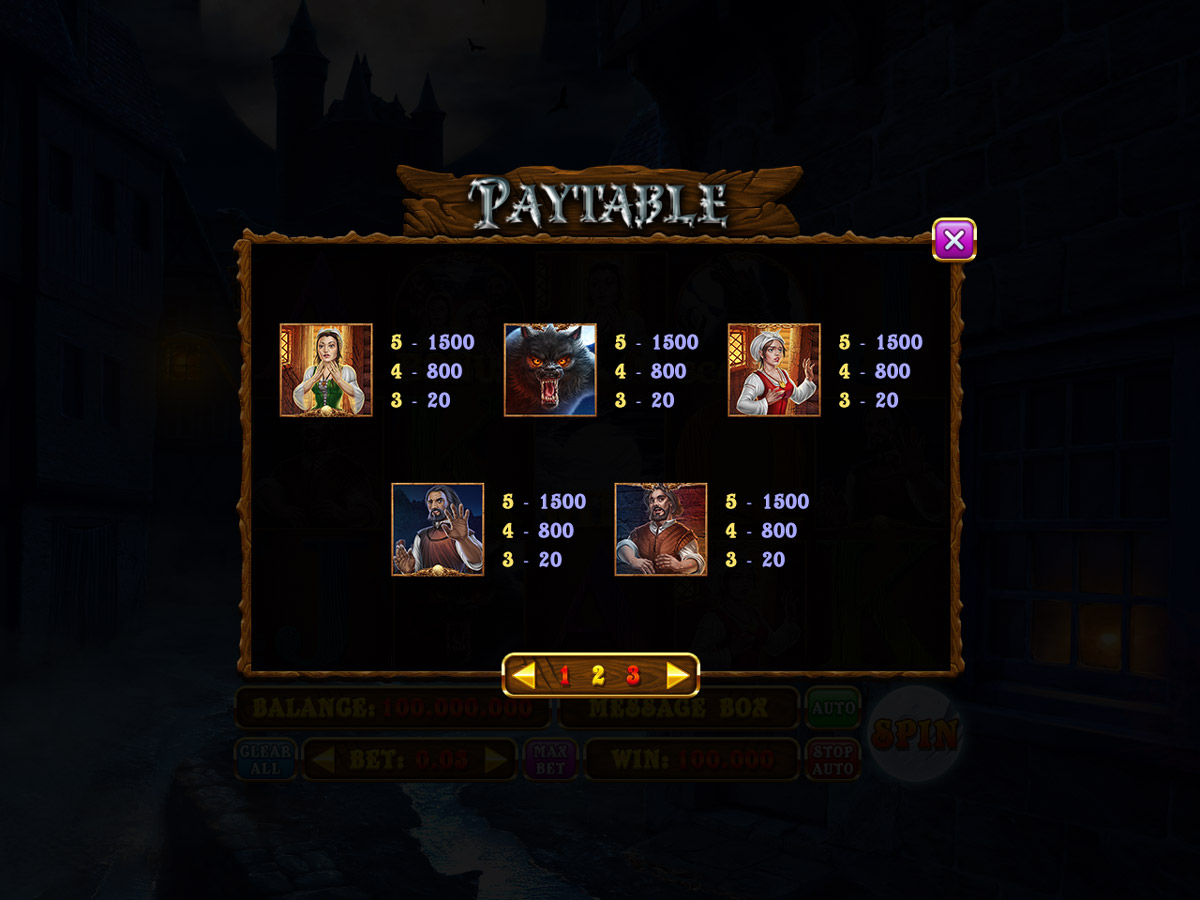 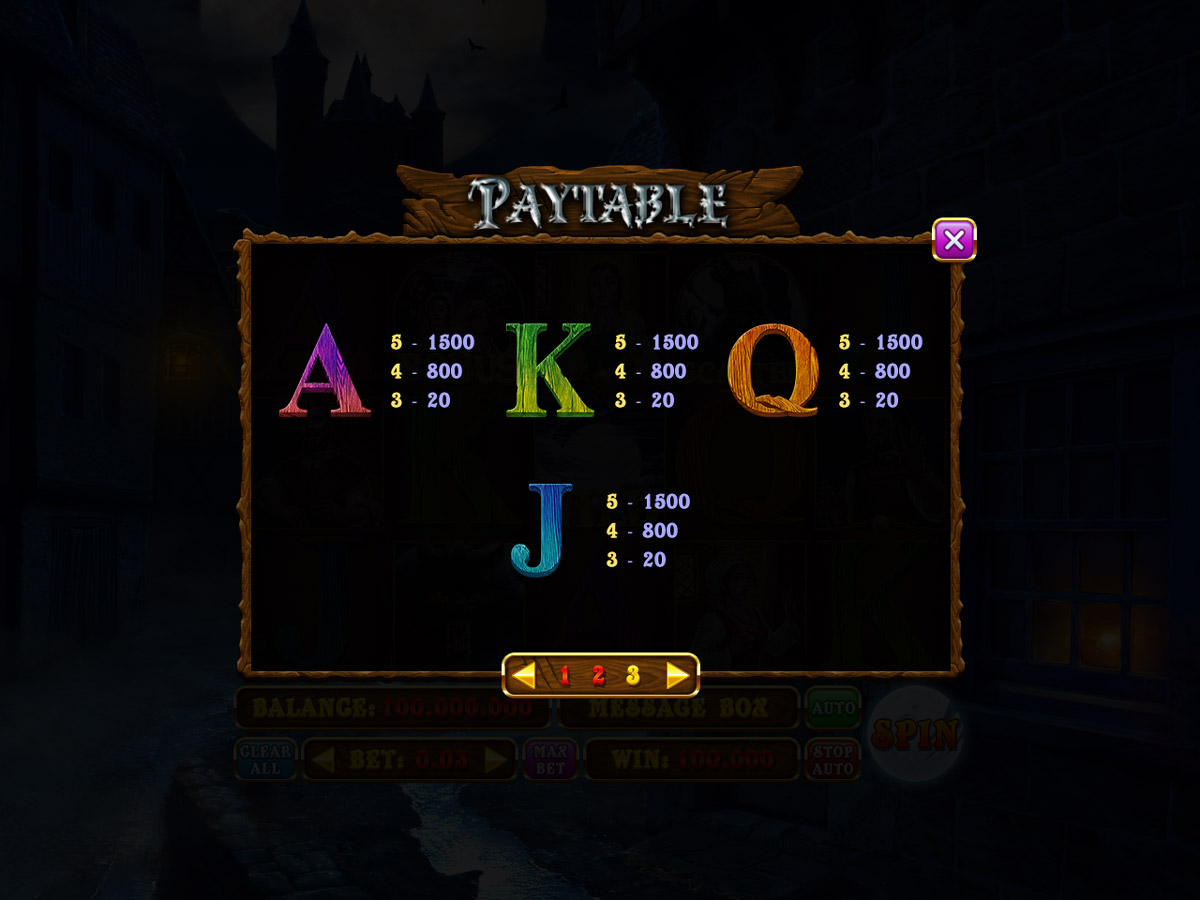 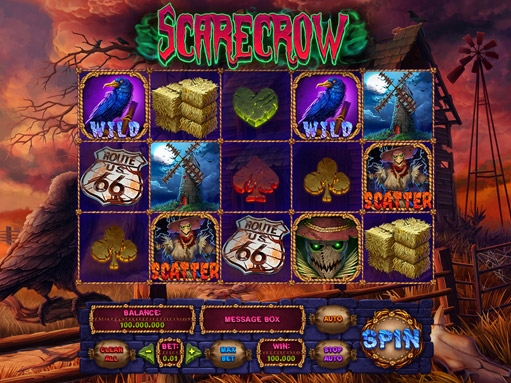 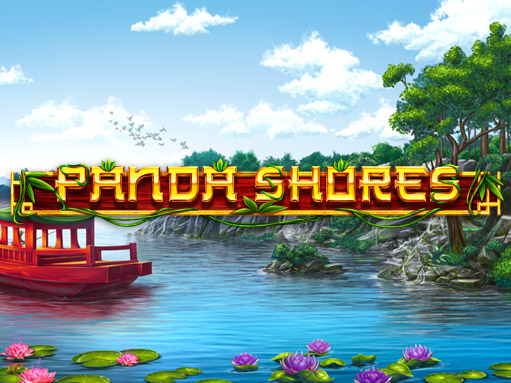