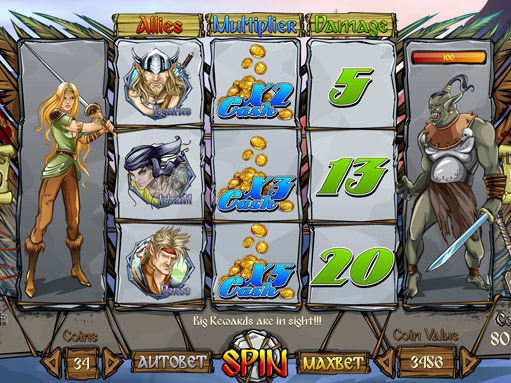 For fans of The Realm and Legendlore comics. If you are their ardent supporter, want to plunge into the kingdom and the world of fantasy, that is full of mystical characters on the battlefield and battle, you are here. It is here that you will receive a tremendous charge of energy, a lot of impressions from the game, become one of the characters, or join the world of battle together with the main characters, into the world of battles and conquests, and you can also try your luck in the main game or variations of additional bonus games.

What do we see? This is a completely different reality, which experienced professionals have skillfully created for gambling lovers. Here you can find bright graphics, stunning animation, and a user-friendly interface – the functionality is at the highest level, which allows you to immerse yourself in the realities of fantasy as quickly as possible.

Therefore, if you are still in doubt, put your doubts aside and start acting. Immerse yourself in the vibrant and addictive Legendlore game. 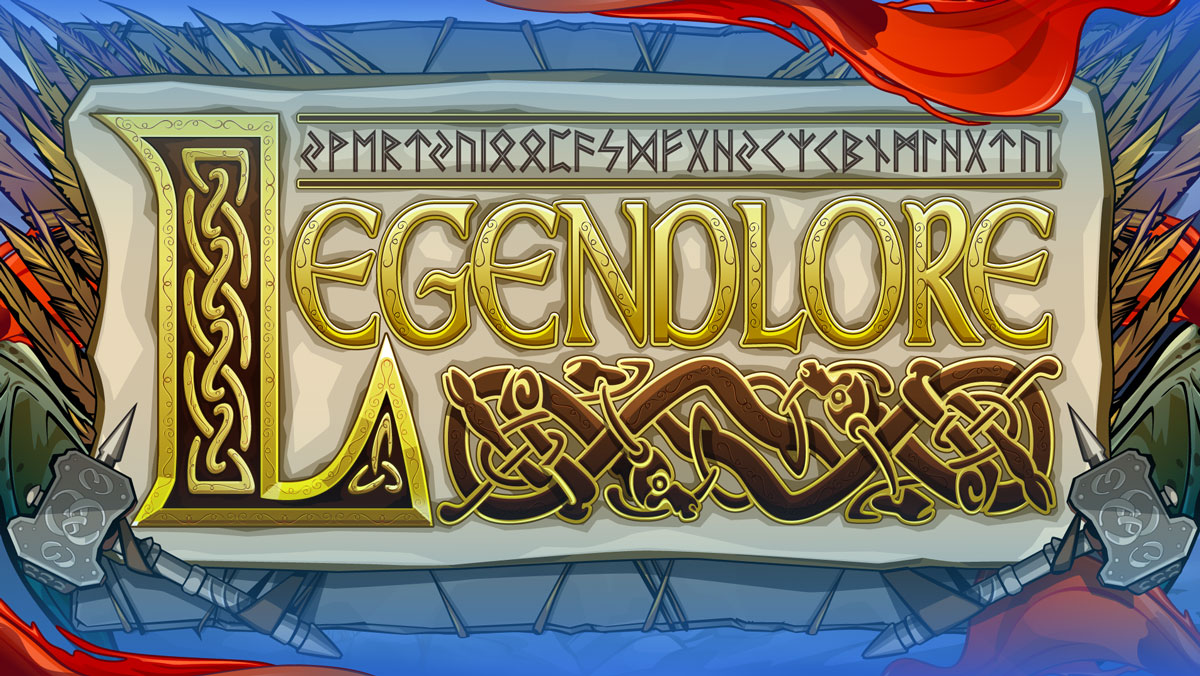 This is the Splash Screen from the Legendlore slot. The splash screen with the name of the slot is made directly on the stone in large bright letters, with a beautiful carved ornament on the main background of the game, as well as an abundance of runic inscriptions of northern traditions in the name. 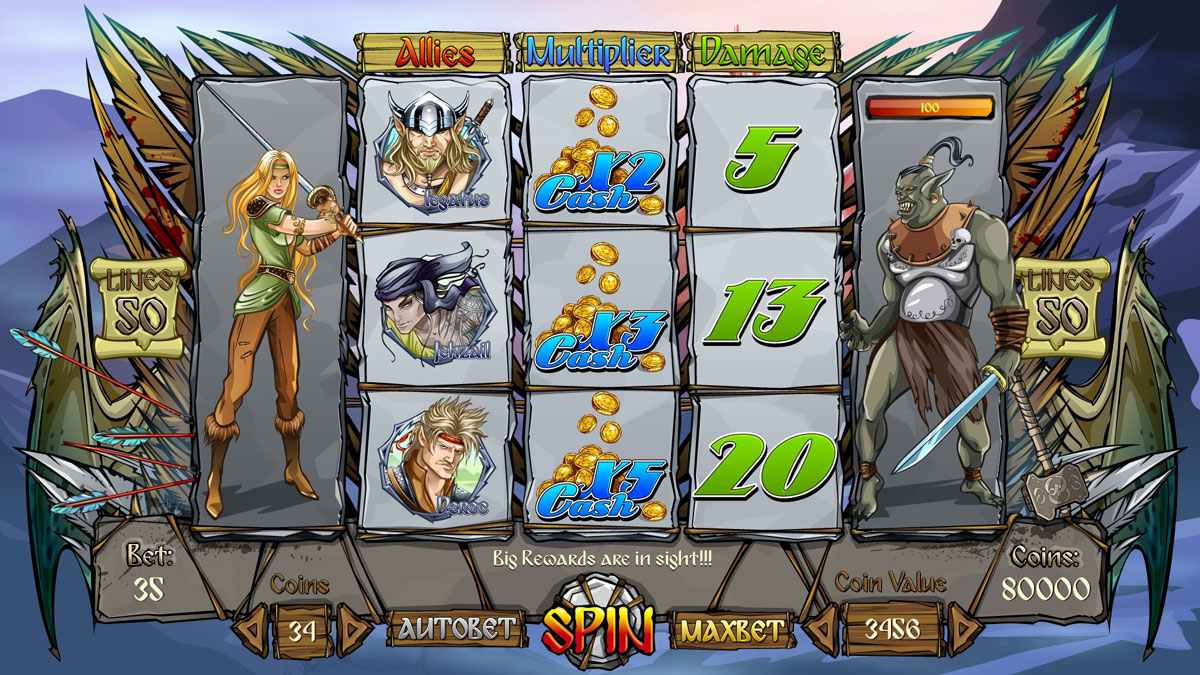 The screen shows the stone reels of the Legendlore slot, that are placed on the main background of the game. The reel itself is placed in the middle of the screen. It includes five columns, which represent all game symbols. On the sides there are two symbols that take up space across the entire column. At the bottom there is a convenient and understandable control panel. In the middle is a large round SPIN button with gradient letters. There are also additional cells with bets and navigation buttons. On the sides, the reel is complemented by feathers, spears, swords and arrows – in the spirit of the Legendlore slot theme. 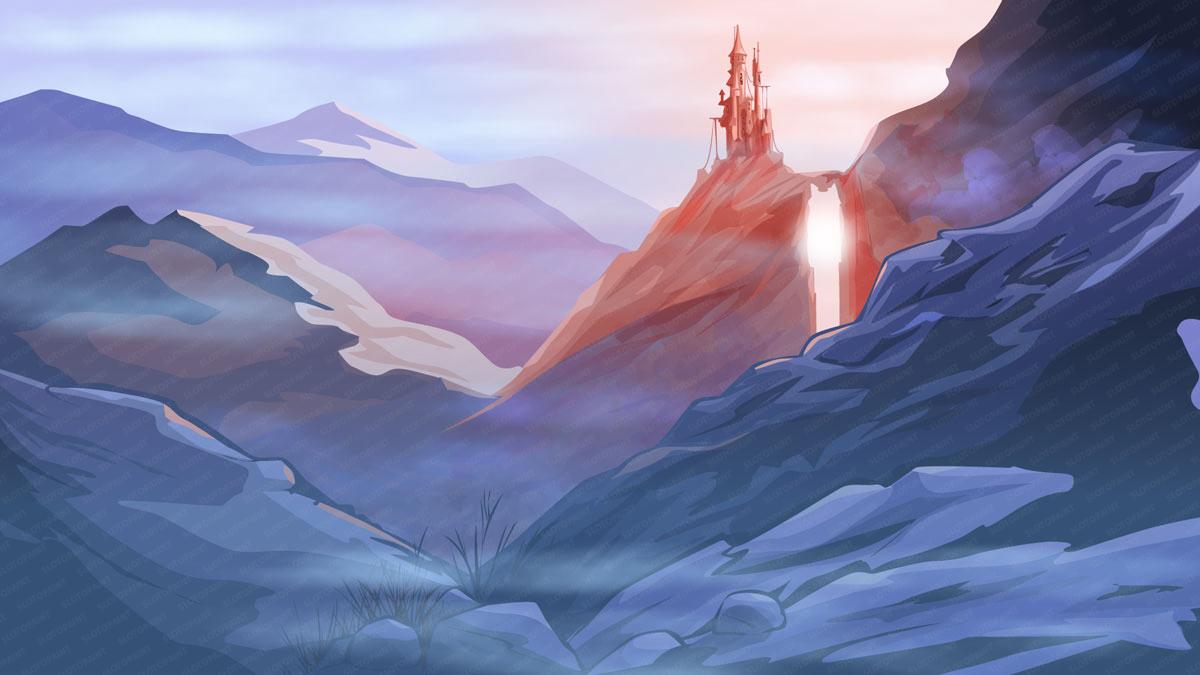 The main background of the game. Here are cold mountain ranges stretched, the peaks of which are directed high into the sky, drowning in the clouds. On one of the peaks, a fortress is visible, it is also a city where the main actions will take place, which is connected by a stone bridge with another mountain, and a precipice is between them .The rays of the indirect sun illuminate sections of the mountain ranges. 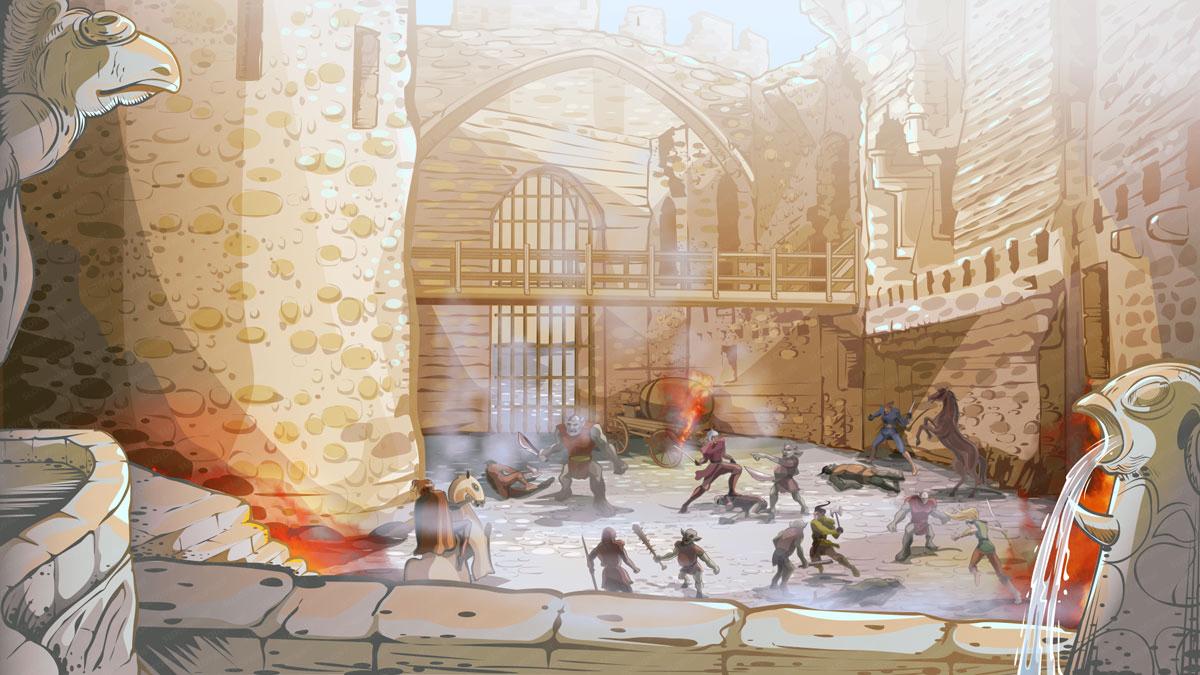 Another background of the Legendlore game. A bloody battle is being fought in a stone fortress at the top of the mountain. In the battle, everything was mixed – horses, warriors, main characters, villains – all the characters in this slot, a battle with swords, shrouded in fire.

Here are four symbols of the highest category. All of them are in rectangular frames with feathers. Each has a unique character and inscription: WILD, BONUS, SCATTER and + 1SPIN. WILD is a warrior girl with a bow. BONUS is a king with a beard and crown on his head. SCATTER is an evil monster with a tail on its head. + 1SPIN is a troll with white hair, horns and butterflies around it.

The animation of the symbols of the highest category brings the fantastic characters of the presented Legendlore slot to life. The hair of the main character swings, the king with the crown shakes his head, the villain’s eyes are burning red, he grins hatefully, waving his hand, and the bonus symbol of the highest category is also animated, his eyes blink, he does not express emotions, and little fairies fly around him. The name captions under each symbol rotate continuously. 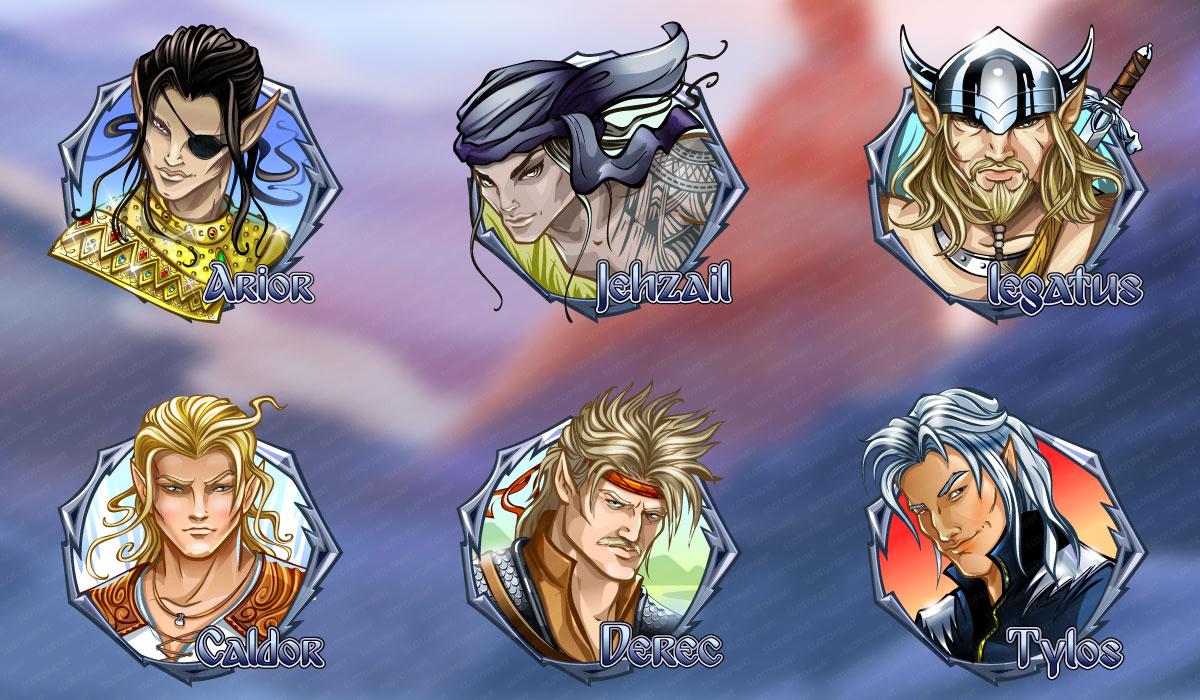 Animation of ‘Regular’ symbols bring fantasy characters and every element to life, making them even more interesting and attractive. Here the player can see the emotion of each hero, distinguish a brave warrior from a villain. The names of the heroes “bounce”, creating lightning under them. 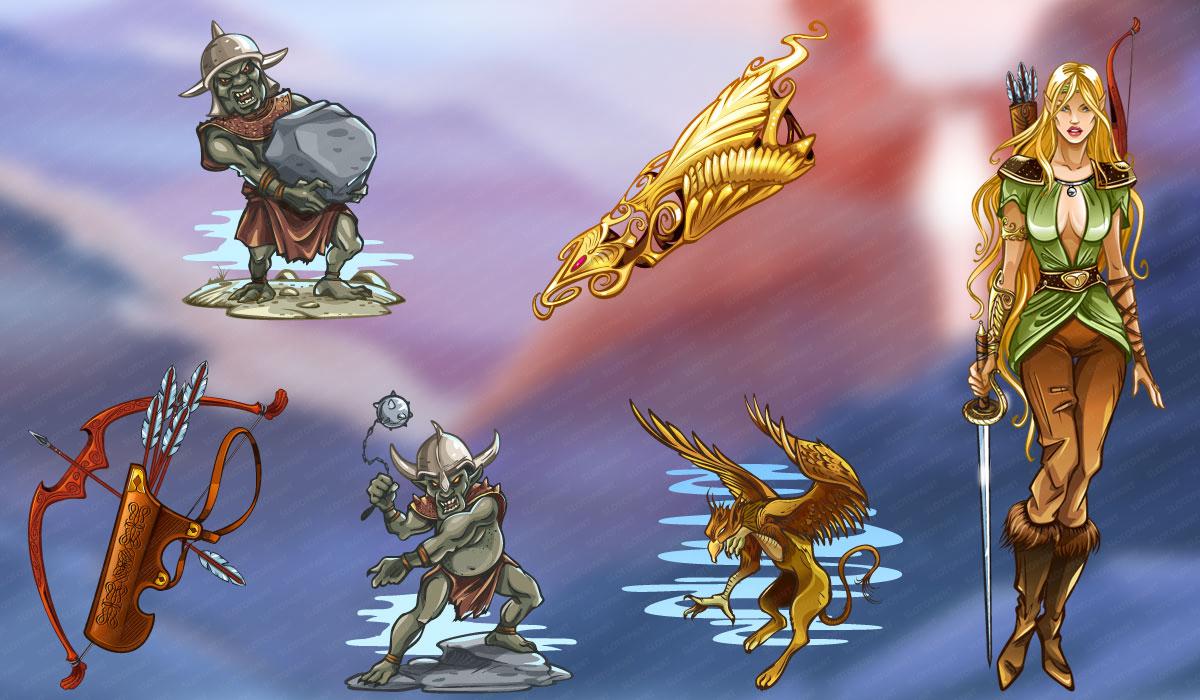 Regular symbols are presented in two rows. Here we see a warlike girl with a sword – one of the main characters of the game, evil trolls, a bow and arrows, a golden element from the heroine’s clothes, and also a flying griffin.

The animation shows how a golden wrist ornament glitters, an evil troll tries to move a heavy stone, a bow shoots dynamically; another troll fearsomely waving a mace, the griffin moves its wings and paws, as if pushing off the ground during takeoff.

Warrior girl, the main character of the game, here we see her appearance. The WILD symbol expands into three cells in height. The screen shows a looped motion tween when the symbol has already expanded.

The screen presents symbols with three piles of gold coins, which are signed in large blue letters X2 Cash, X3 Cash, X5 Cash. They means increasing the monetary gain by a certain number of times.

Three more symbols with a steel sword, which are complemented by the signature in big red letters X2 Damage, X3 Damage, X4 Damage. 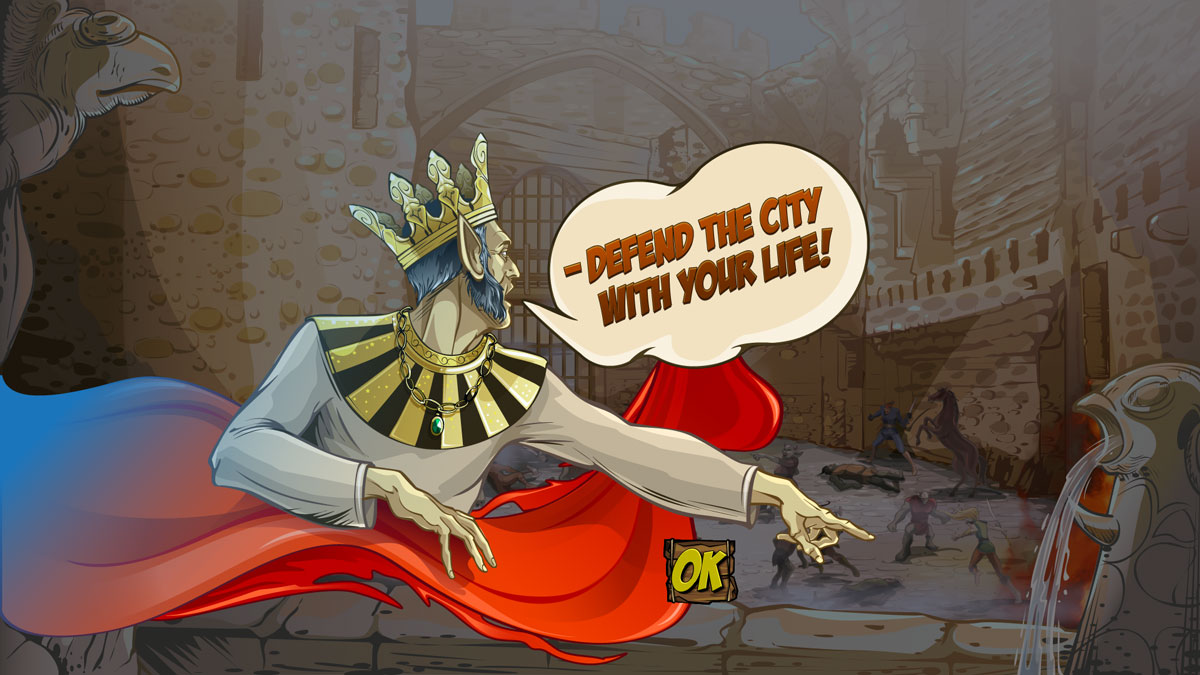 Pop-up. On the background of the battle in the fortress, we see the king talking about defending the city with your life. A pop-up appears before a bonus game: a battle between two main characters. Below the king there is an OK button. 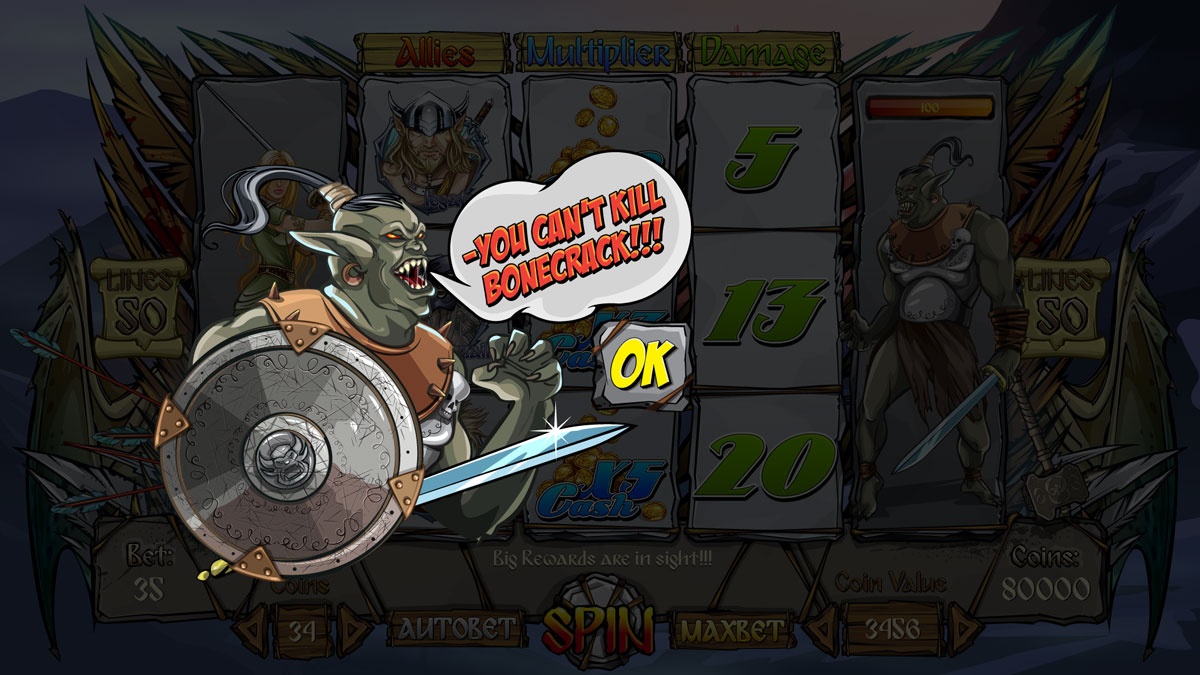 Here is a vicious troll with a shield and a sword, shouting that you cannot kill the Bonecrack. Below is the OK button. 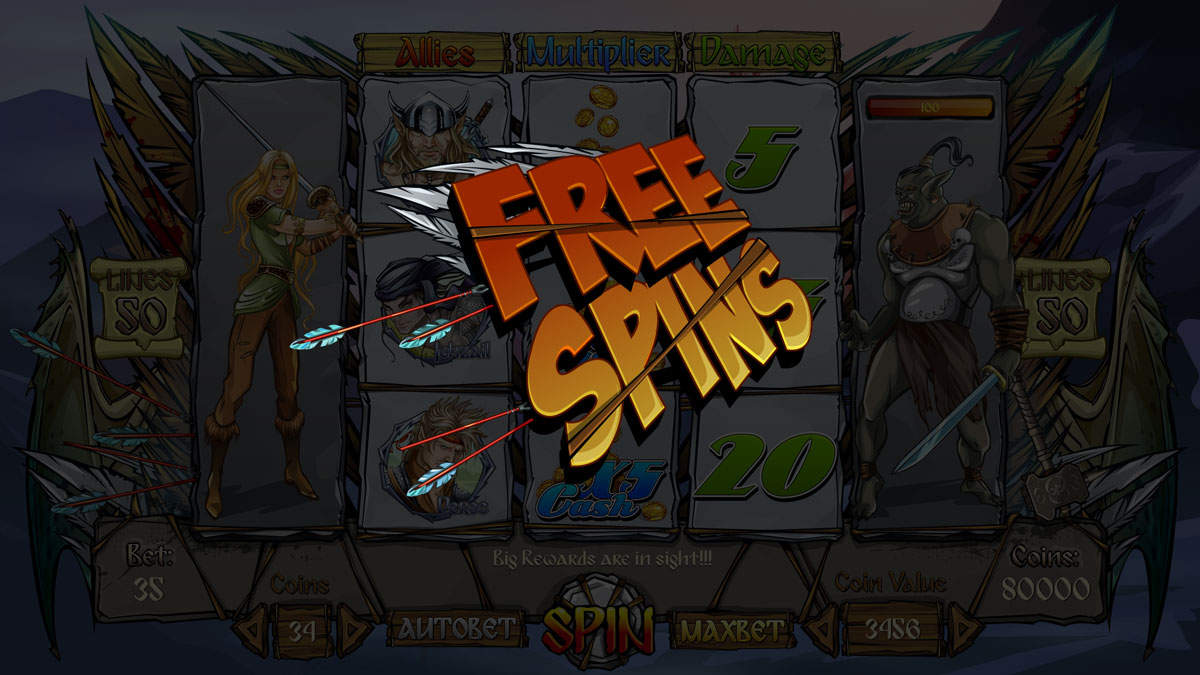 FREE SPINS pop-up is presented in big red letters with the addition of arrows with feathers. 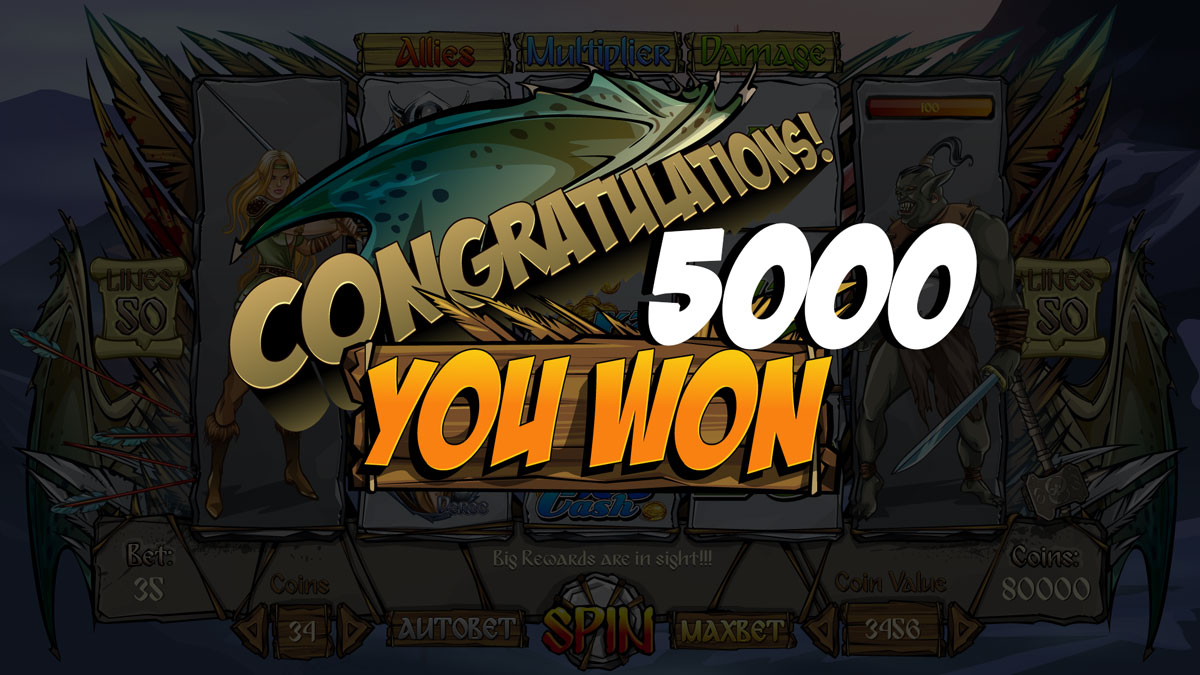 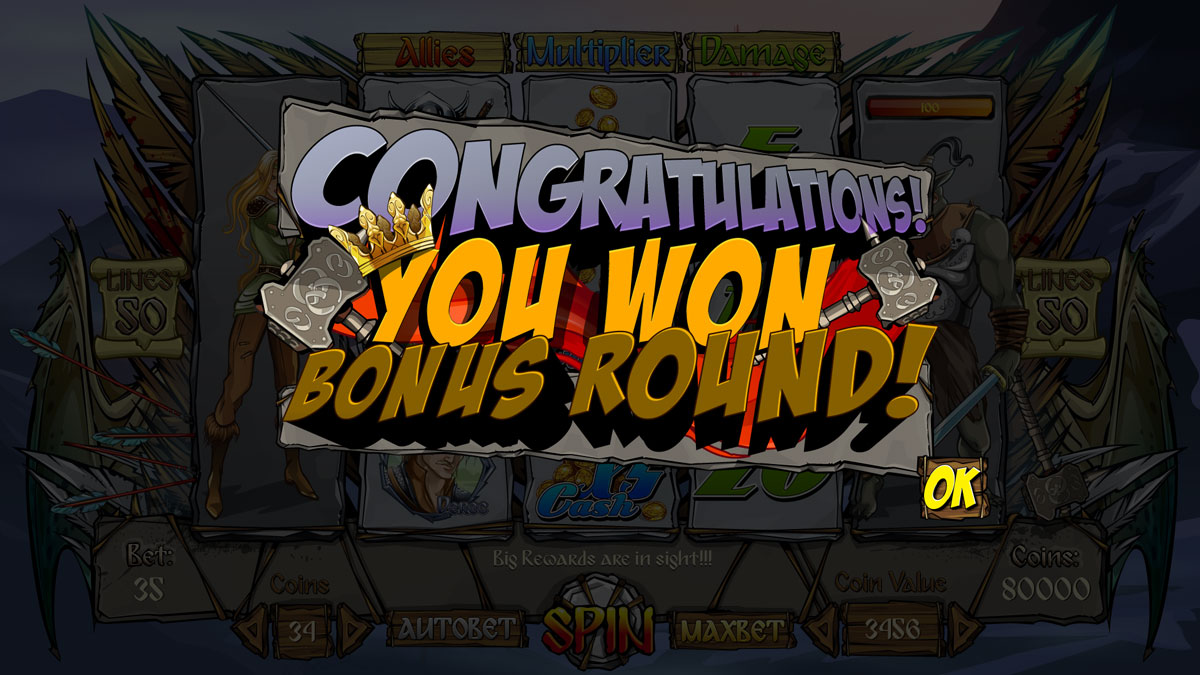 Congratulatory inscription that the player has won the bonus game. Inscription is made in large letters. Near the bottom right is a yellow OK button. The inscription is complemented by a gold crown and a stone and metal sledgehammer.

An animation showing all the above pop-ups: from the king calling for a fight to winning the bonus game. 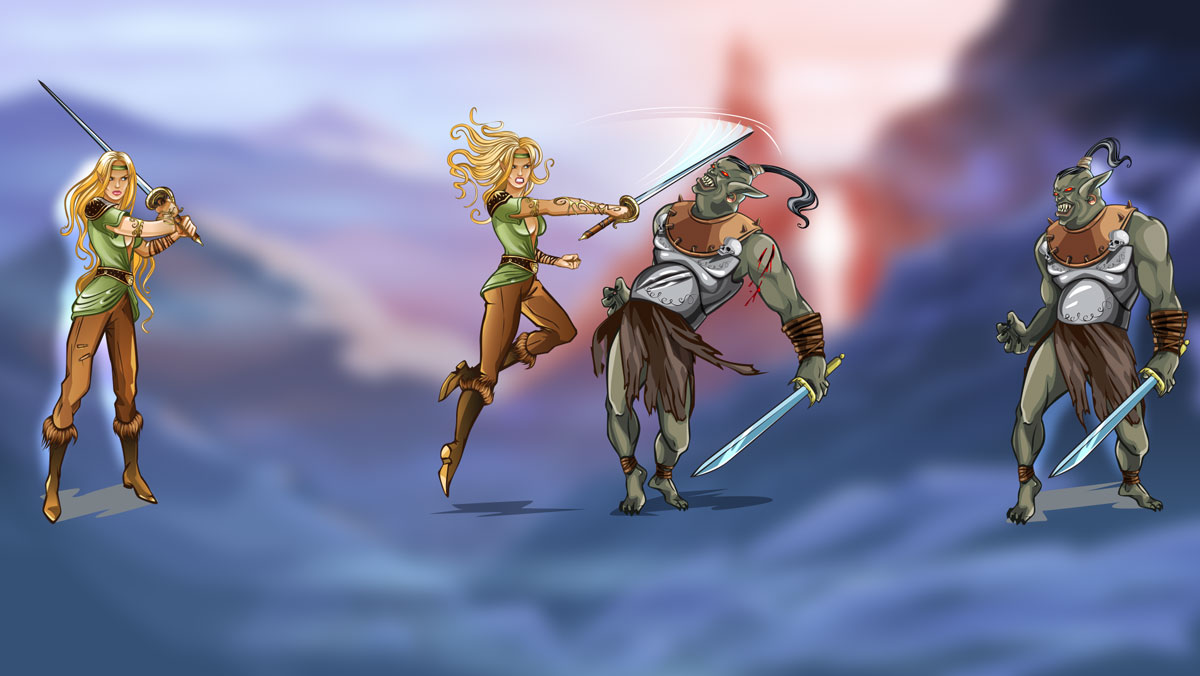 An image with the battle of the characters. Here is our main hero of the game – a warrior girl who swings her sword at a villainous enemy. 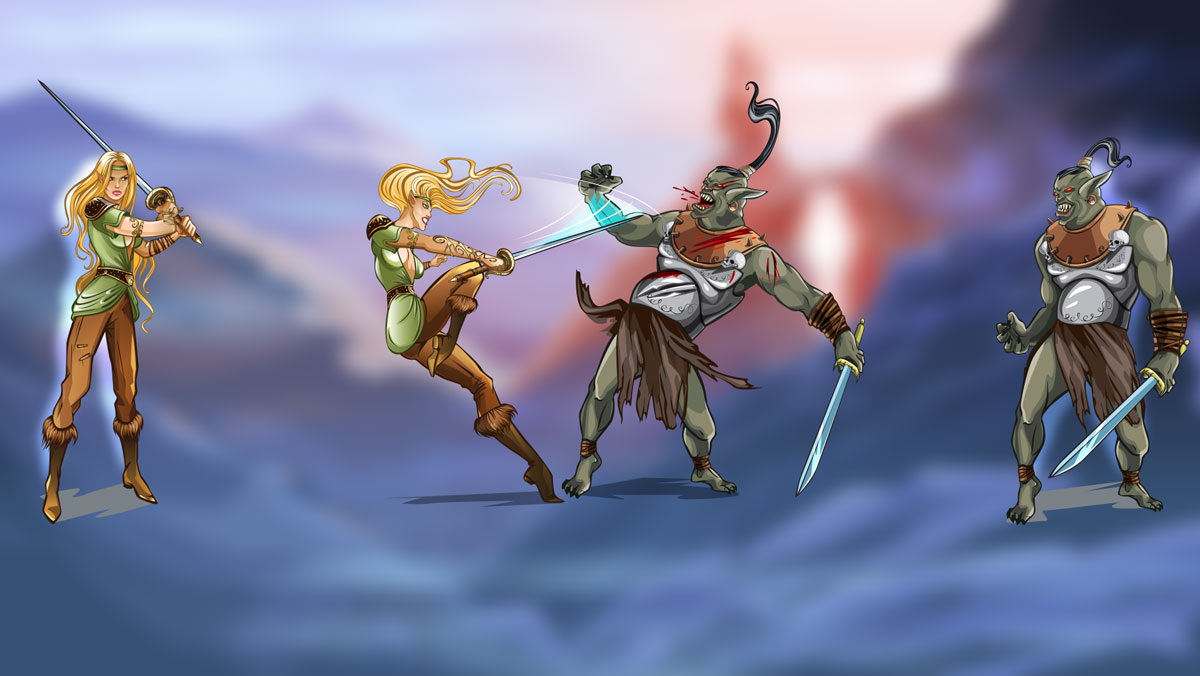 The picture shows a bloody battle, where a girl attacks an evil troll, cutting off his head. Bloody footprints appear on the villain. 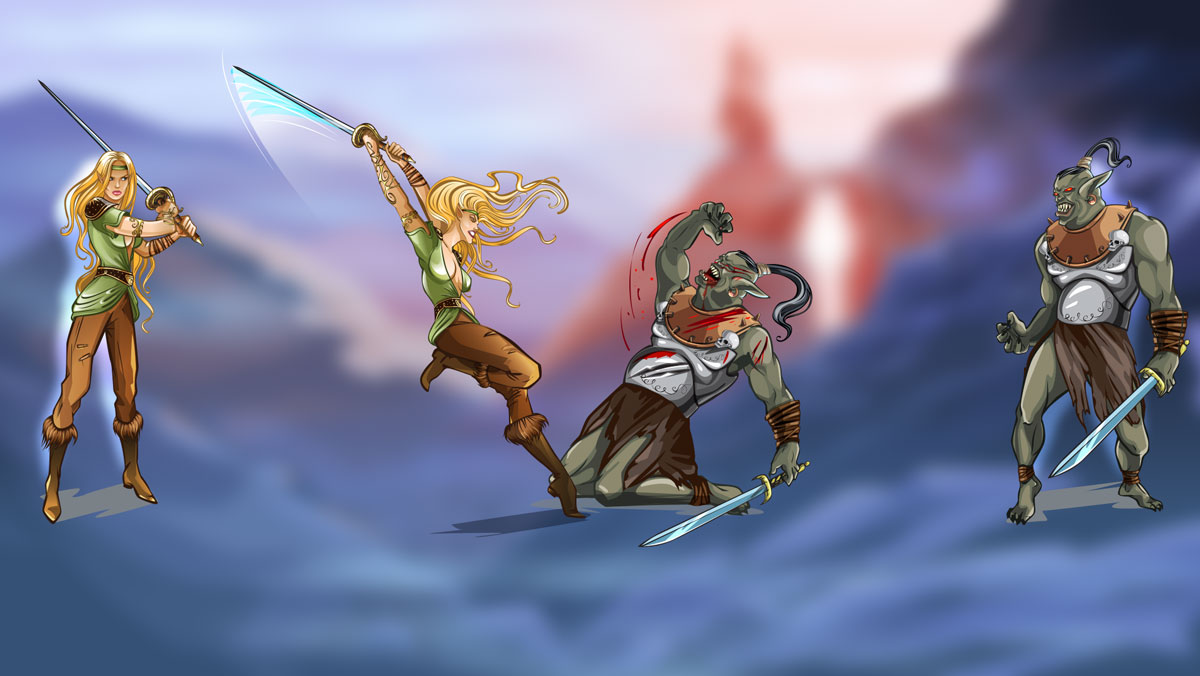 The girl swings her sword and attacks the enemy, who falls to his knees, stricken, bleeding. 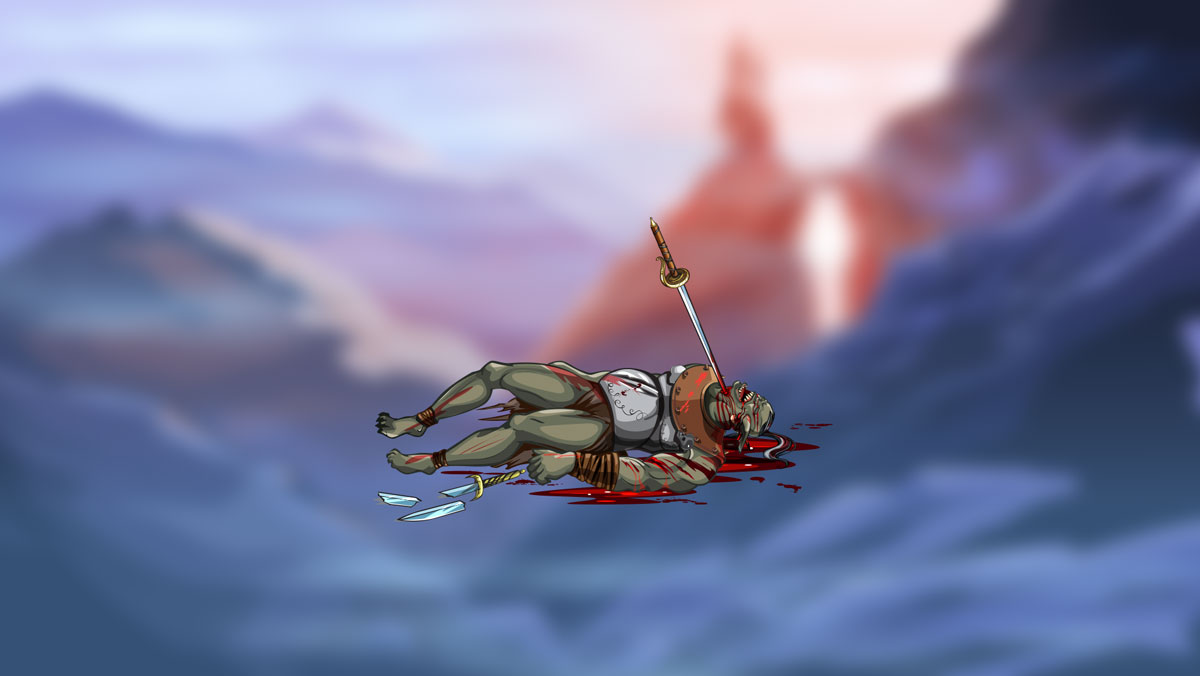 The picture shows the deposed villain, lying on the ground in a pool of his own blood, stabbed to the neck with a sword.

The animation shows the battle between the warrior girl and the villain from the pictures above. In the animation, bloodshed occurs, the enemy is destroyed. At the same time, all actions unfold like flashes on the background of the reel of the presented slot. 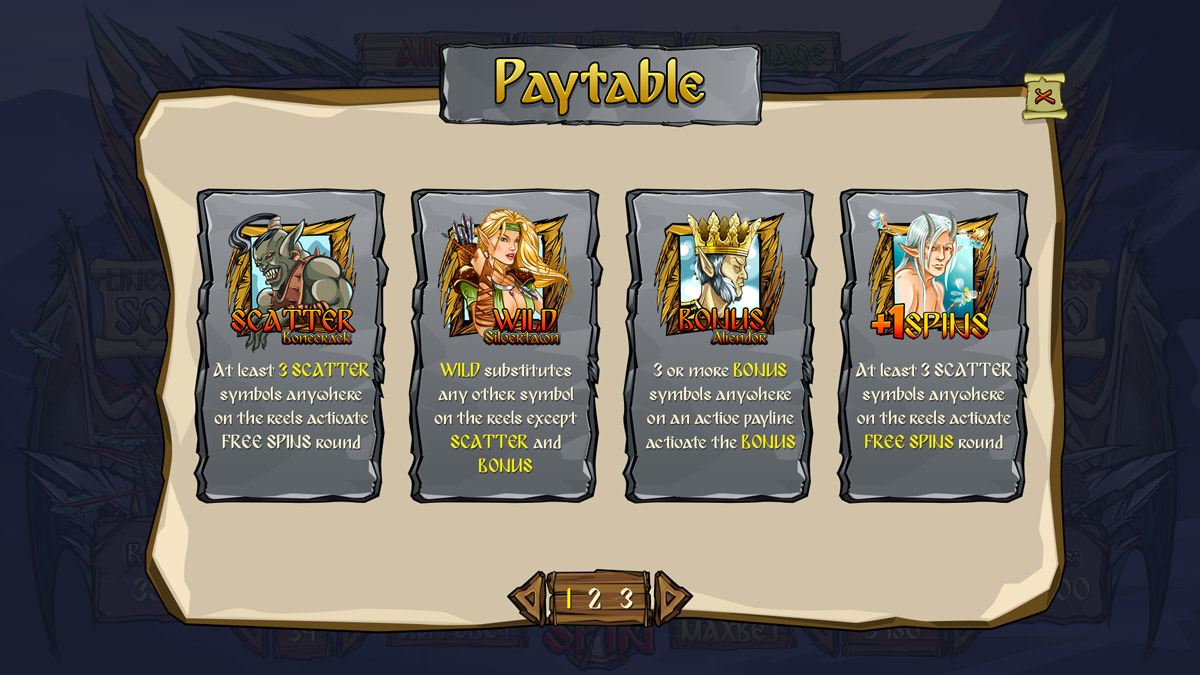 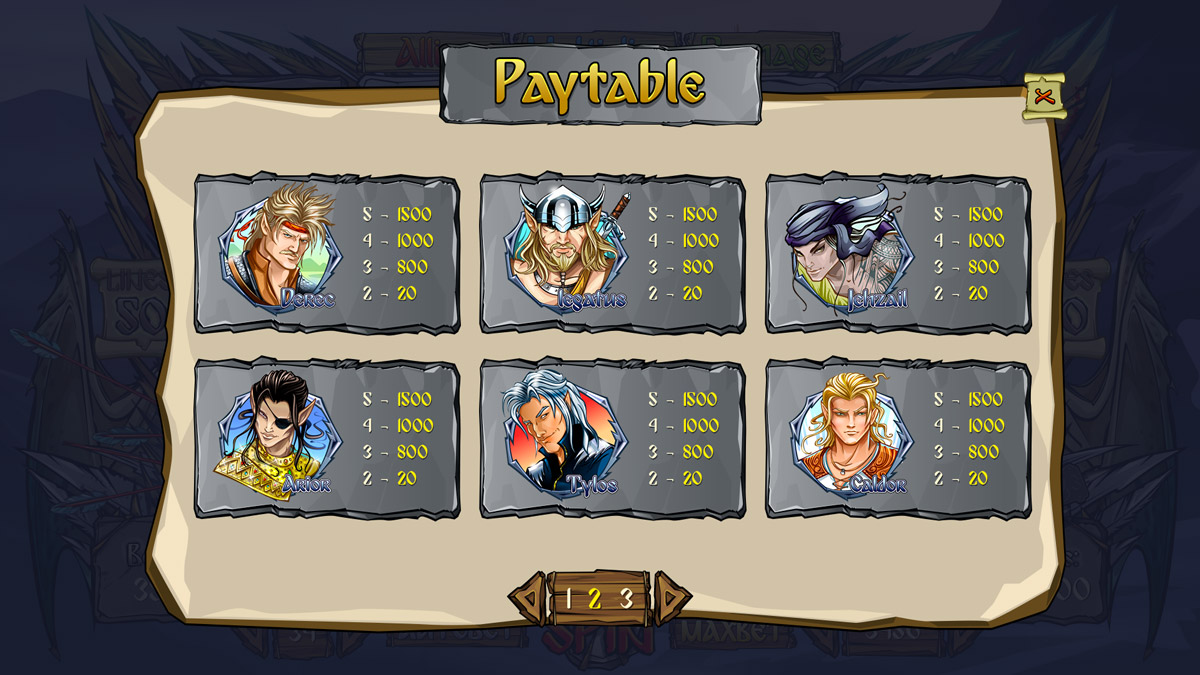 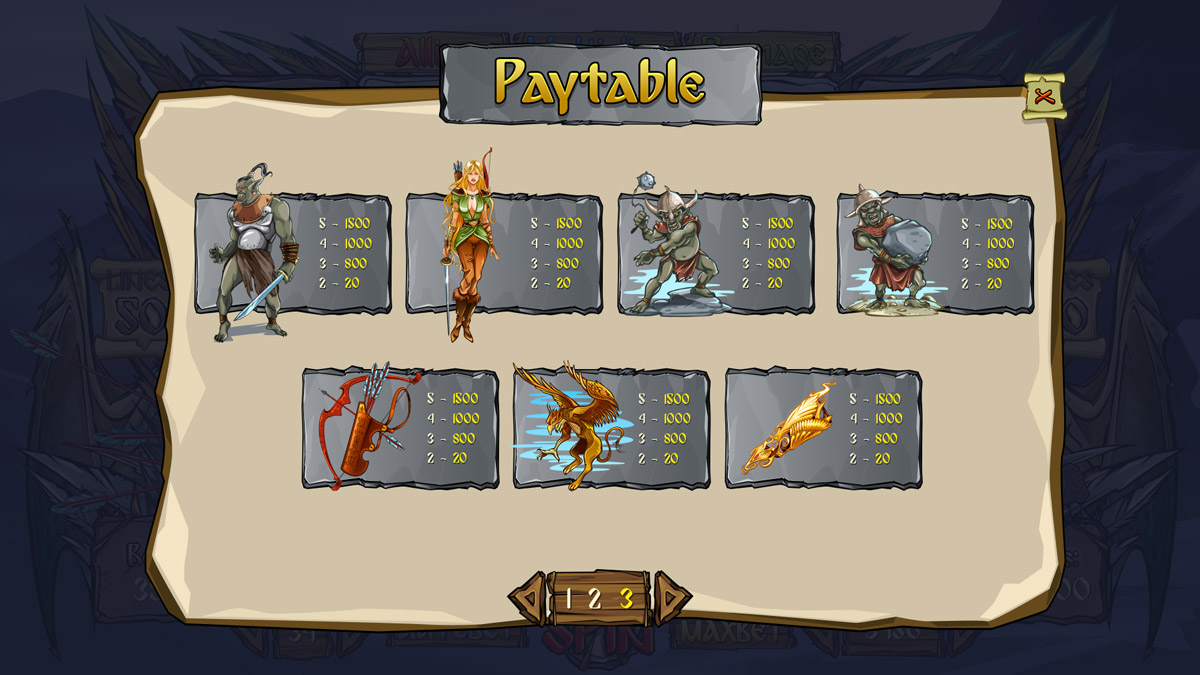 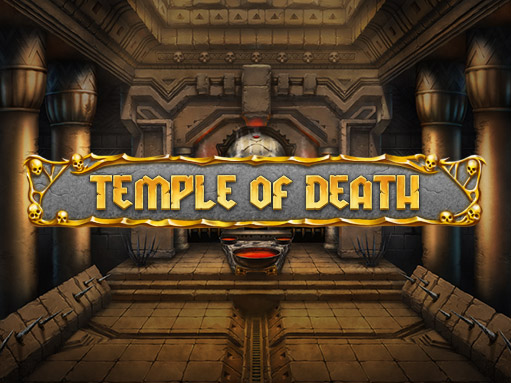 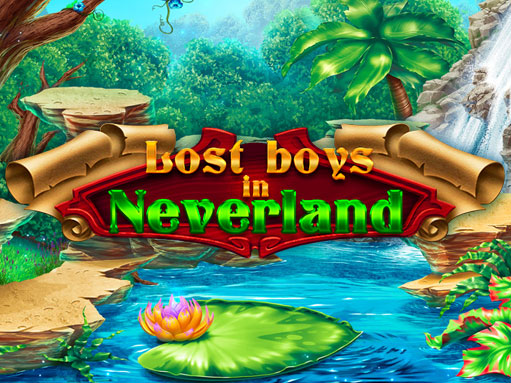 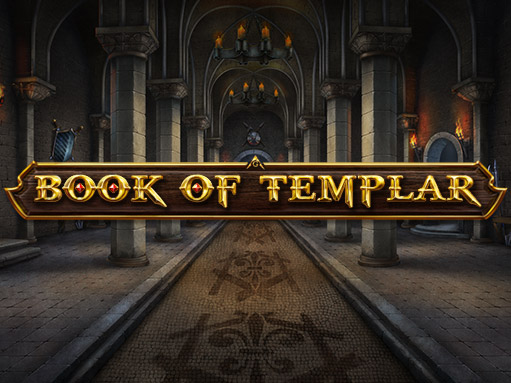